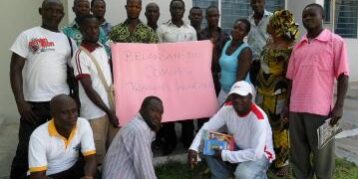 ADVOCATES AND TRAINERS FOR CHILDREN AND WOMEN’S  ADVANCEMENT AND RIGHTS

Advocates and Trainers for Women’s Welfare Advancement and Rights (ATWWAR) was founded in May 2000. Its aim as the portrayed by the name is to lead support on issues of welfare, advancement and rights of women and children in Ghana. ATWWAR believes that women’s needs cannot be alienated from the needs and concerns of their children nor their communities and that all international conventions and protocols must be translated into grass– root activity if a meaningful impact is to be made of them.

ATWWAR has over the years engaged in various activities that significantly contributed to the elevation of women and children. It has developed the Pictorial Group Records (PGRs) which is a set of pictorial record books for group management to introduce affiliate groups to sound record keeping through the use of the PGRs. Again, the organization has facilitated an ABANTU/ WILDAF network for Assembly women and aspirants to the Districts Assembly Election in the Western Region. To improve upon the financial strengths of the women’s groups, ATWWAR has mobilized savings for six groups (with an average of membership of 180) to the tune of ￠26 million and invested them into treasury bills on their behalf. Again, ACTWAR has organized five Mutual Health Schemes in the Nzema East and Shama Ahanta East under its APOW-MU– PAH project with the support of DANIDA. An HIV/AIDS awareness project has been implemented in Nzema East and Jomoro with the support of GARFUND. Currently, the organization is working in four districts in the Western Region and hopes to extend coverage to the entire country.

Under the Mwananchi project, ACTWAR seeks to use the traditional BELANDAN-BO Platform to channel issues of women and children to the attention of recognized authorities. The platform brings together queen mothers of the project areas to solicit the views of the marginalized in society and give them the opportunity to meet their leaders face to face to discuss issues of great concern to them. This was done through the engagement of key state actors such as Assembly persons, MPs, DCEs, Chiefs and other heads of departments working in a particular area with some experience in relation to the issues raised on the BELANDAN-BO platforms.

This platform does not only look at the welfare of women but children as well. The BELANDAN-BO platform also accorded children’s clubs the opportunity to participate in the engagement with Duty Bearers by using Trigger Sketches to communicate issues pertaining to their protection and development.  Using a participatory approach, the linkages between the role of the queen mother, decision-making and the sale of new babies to some faith based organization in the Ivory Coast were explored.

ACTWAR through the first phase of the Mwananchi project has clarified and strengthen the role of Queen Mothers in the welfare of women and children. The marginalized in society are actively involved in decision making processes which in tend have enabled women and children to learn to assert their rights. Traditional Authorities, Elected Representatives, Assembly Members and other Duty Bearers are regularly engaged on issues pertaining to women and children and the Belandan-bo platforms created and institutionalized as vehicle for more participatory decision making within the project communities. All these efforts have contributed immensely to the curtailing of trafficking children. Community Public Address System (COMPAS) Operators in the communities have been trained on the scope of authority of Queen Mother and on the issues pertaining to child trafficking, none maintenance and violence against children and they are now educating the public on these issues in their dawn and dusk broadcast

Under this phase, the project seeks to achieve two major objectives which are to consolidate the phase I achievements and strengthening the capacity of beneficiaries of the platform in the pilot communities of phase I.