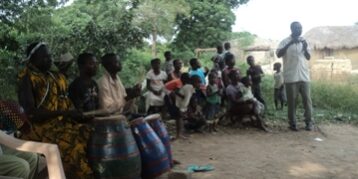 Toyace which seeks to promote the rights of children is based in the North and South Tongu districts of the Volta region of Ghana. Toyace has been organising a weekly liver broadcast where community members make their voices heard by speaking against issues that affect their development and also has been engaging the members of the Tongu District Assemblies including the DCEs to be more transparent and proactively engage them in different levels of decision-making.

Through the Mwananchi project, Toyace sought to Promote inclusive decision-making in rural communities; Eradicating Marginalization and Vulnerability through Constructive Engagement with its target groups being economically disadvantaged youth, children, disadvantaged women and people with disabilities in Tongu rural communities. The project seeks to empower children to have a stronger voice in the community, especially on issues which affect their rights and engage with traditional authorities and government officials so they can be included in the decision making processes. This project specifically sought to empower the poor and vulnerable in Agave Afedome and Avadiwe –Kome electoral areas to constructively engage their elected representatives, government officials and traditional rulers to involve them in the decision making processes in order to help remove marginalization and alleviate poverty. To make this realistic, civil societies were strengthened to help citizens effectively present their views and interest and hold traditional and local government accountable for their actions at different levels in the governmental system within North and South Tongu Districts as well as the rights of children recognized and respected.

Through this initiative, Toyace was able to establish children’s clubs where the children were trained in public speaking and leadership skills and also meet with community members on how to engage with duty bearers and government officials. In order to ensure that the rights of children are respected, Toyace organized radio drama which focused on common child rights abuses such as physical abuse, sexual abuse, emotional abuse and child labour. With this, the self esteem of the club members have increased and this is evident in the high interest in schooling among the club members and even other children in the community.

In spite of the successes that the project achieved, Toyace encountered some challenges. One major challenge was the lack of volunteerism among the community members which was evident in the children’s club facilitators advocating for allowances. Also, since the major  occupation of the people is farming, it was very difficult getting the community members during the farming season and also the duty bearers as they felt we were going to add up to their problems.