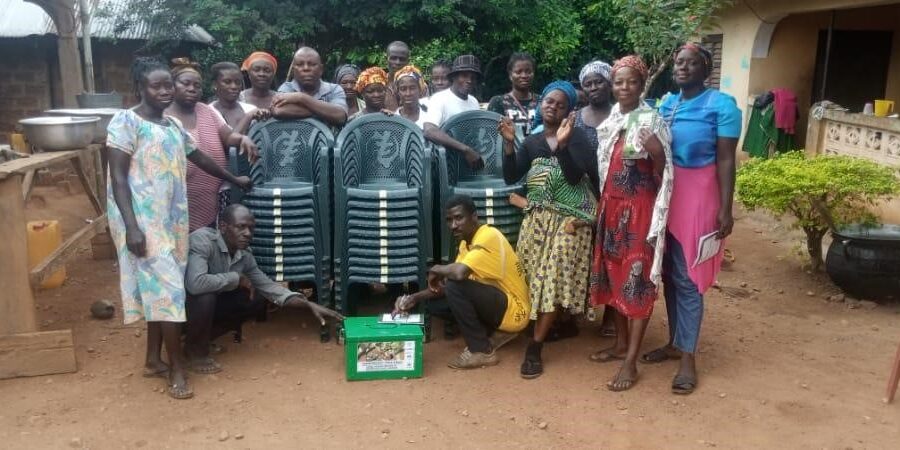 The VSLA-CHILD project in Ivory Coast is a financial inclusion and child labour remediation scheme that aims to improve the savings culture, provide access to micro-credit, increase the gender awareness and provide a platform for child labour sensitization among cocoa farmers.

The 29 VSLA groups formed under the project meet weekly to purchase shares, grant micro-credit (loans) to their members and repay their loans.

After the training of two representatives (GALS and Child Labour champions) from each group in the previous quarter, the groups have started their GALS and child labour training at the community level. The groups meet either before or after their weekly share purchase and loan meeting, depending on what works for them, to have the GALS training and child labour sensitization sessions using coloured anti-child labour facilitation flashcards designed and produced by PDA.

The GALS training was new for the VSLA group members. Even though some group members thought it was time wasting at the beginning, they have now wholeheartedly accepted it. Building a house seems to be the foremost vision of a majority of the group members.

All the 80 VSLA groups under the project have been formed with a total membership of 2064 farmers. 901 of the members are males and the remaining 1163 are females. During the third quarter, the groups met weekly to purchase shares, grant loans and repay their loans.

Gender Action Learning Systems (GALS) and Child labour training were organized at Agona Dukwa, New Edubiase, Suhum, Konongo and Samreboi for 160 GALS and Child Labour champions who were selected from the groups. After the intensive training of two representatives from each of the groups, the trained champions have started training their group members on GALS and child labour, with support from the project field officers.

On August 16th and August 17th 2022, two VSLA groups in the Assin Fosu and Nsokote districts were visited by clients of Beyond Beans.

Stephen Oduro from Dzinpa group in Topre in the Duakwa district took a loan to buy agrochemicals which he applied on his cocoa farm. He is very grateful to the group for the loan because he would have struggled to get the loan which would have been at a very high interest rate.

The Dzinpa VSLA group in Topre bought plastic chairs for their weekly VSLA meeting with part of their social fund. The chairman of Mawu Maa Pee VSLA group in Abrenya-Yohonu and the Purchasing clerk donated a table and wooden benches to the group to solve their chair deficit problem. The chairman of the group promised to add more benches to enable all the group members to sit comfortably during their group meetings.

It has emerged from the loan data that the top three reasons for loan request have been to expand existing business, farming-related expenditure and payment of school fees and other education-related expenses.

Group members drawing their symbols for numbers during GALS training

Nestlé’s Income Accelerator Program (IAP) is an initiative that seeks to improve the livelihood of cocoa farming households. PDA in partnership with Beyond Beans is using the VSLA-CHILD methodology to increase farmers’ access to microcredit, improve their savings culture and income diversity, increase their gender awareness and sensitivity, and sensitize them on child labour using coloured anti-child labour facilitation flashcards.

Community entry for the formation of the VSLA groups was continued in July. Currently, 60 VSLA groups have been trained to elect their executives, draft their constitution and start purchasing shares. The groups meet weekly for share purchasing. First Loan meeting training, first loan repayment meeting training as well as GALS and Child Labour champions training will be done in the last quarter of 2022.

The target number of VSLA groups which were supposed to be formed under the project was exceeded. The interest in the project by farmer cooperative members and other community members from the selected communities was very high.