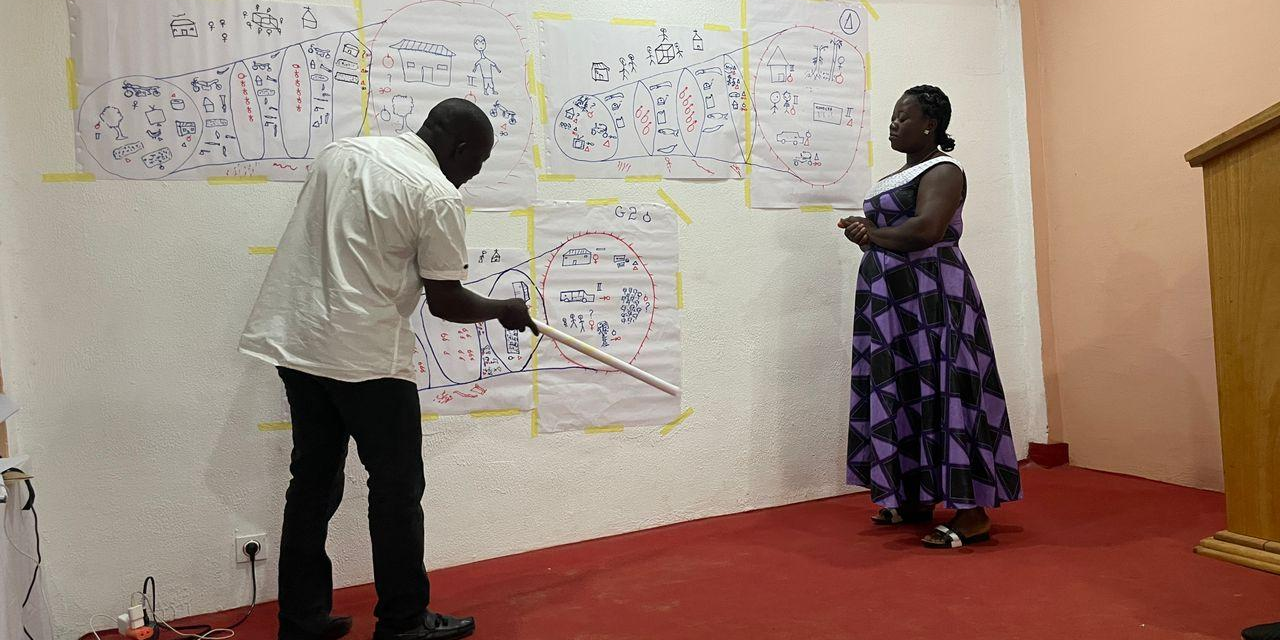 Here are the updates from the second quarter of our VSLA initiatives:

The VSLA-CHILD Project is in partnership with Beyond Beans and is a child labour remediation initiative that aims to tackle child labour in cocoa-producing communities through a community-driven approach. It also seeks to increase farmers’ access to microcredit, improve their savings culture and income diversity, as well as increase their gender awareness and sensitivity.

The VSLA groups formed under the project are purchasing shares and taking loans. The endline data collection tool for the VSLA-CHILD Project is under review and it is expected to be deployed soon.

On 12th April, and 24th May 2022, Beyond Beans and Mars visited five VSLA groups under the project. The groups that were visited included Yesu Nti at Amakye Bare, Korye, Peace, and Nyame Nti at Nkyemkyemso and Onua do at Ampoma.

Picture 1: An official from Mars interacting with members of the Yesu Nti VSLA group at Amakye Bare

The Village Savings and Loans Association (VSLA) with Gender Action and Learning System (GALS) is an economic empowerment initiative implemented in Cameroon by Participatory Development Associates (PDA) in partnership with Beyond Beans and Socam 5C to improve the savings culture, increase access to micro-credit and promote income diversity of the project beneficiaries.

The field officer continues to visit the groups fortnightly to supervise their activities to ensure that they operate within the parameters of the project to ensure sustainability. There are 31 VSLA groups under the project currently (11 old groups, 20 new groups) with a total membership of 883 farmers. The groups meet weekly to purchase their shares and take loans to support their micro-businesses. With the support of GALS champions of the old groups, five of the new groups have started their GALS training while the remaining fifteen are making preparations to start.

There are 760 members under the VSLA-CHILD Project in Ivory Coast. 211 of them are males while 549 of them are females. All the 29 groups formed under the project are purchasing shares. Group members have started taking loans and repaying their loans.

Training of 2 group members from each group who are to serve as champions for Gender Action Learning Systems (GALS) and child labour in their groups has been completed at San Pedro (16th May, 2022 – 20th May, 2022) and Daloa (30th May, 2022 – 2nd June, 2022). GALS and Child Labour training is currently ongoing at the group level.

Picture 5: VSLA group meeting during the monitoring visit at Bonon

Monitoring of the groups was carried out between 9th May, 2022 to 27th May, 2022 for data collection and supervision.

70 groups have been formed so far, with 10 more groups yet to be formed. 63 of the groups are currently purchasing shares while 7 are still undergoing training to elect their executives and develop their constitutions.

Baseline report for the project has been completed. Profiling of all the group members is ongoing.

PDA in partnership with Beyond Beans is forming 58 VSLA groups using the VSLA-CHILD Methodology as part of Nestlé’s Income Accelerator Program (IAP) in Ivory Coast. The program was launched in Divo on 3rd June, 2022. The program is being implemented with farmers from two farmer cooperatives namely Spad Gagnoa (Gagnoa) and SCOOPABL (Blé). Field officers for the project were trained at Gagnoa from 7th June to 10th June 2022.

Picture 7: Group Picture after the launching of IAP in Divo

Community entry and sensitization is ongoing for the formation of the VSLA groups.