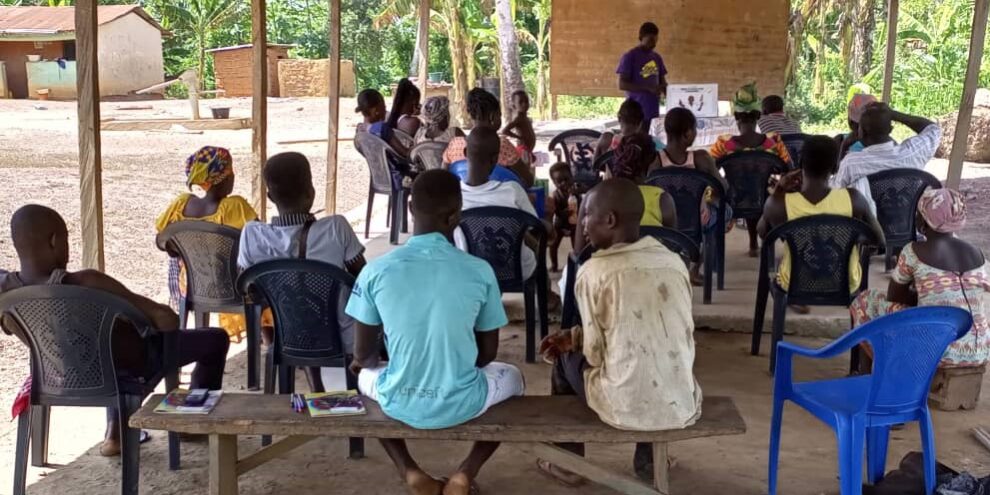 The VSLA-CHILD Project is in partnership with Beyond Beans and is a child labour remediation initiative that aims to tackle child labour in cocoa-producing communities through a community-driven approach. It also seeks to increase farmers’ access to microcredit, improve their savings culture and income diversity, as well as increase their gender awareness and sensitivity.

34 out of the 38 VSLA groups formed by PDA under the VSLA-CHILD Project have successfully done their end of cycle share out. This means that 96 out of the 100 VSLA groups formed by the project have done their share out. 2 new groups have been formed after the share out in the Nsokote district. All the groups who have done their share out have started their second cycle. The field officers continue to visit the groups for monitoring of their group meetings and Household Development Plan implementation. Field officers are preparing for the endline data collection.

The Village Savings and Loans Association (VSLA) with Gender Action and Learning System (GALS) is an economic empowerment initiative implemented in Cameroon by Participatory Development Associates (PDA) in partnership with Beyond Beans and Socam 5C to improve savings culture, increase access to micro-credit and promote income diversity of the project beneficiaries.

All the 11 VSLA groups formed under the project had their end of cycle share out between 13th to 17th December 2021. After the share out 18 new groups have been formed in addition to the 11 groups. Currently the project has ended; however, the field officer continues to visit both the old and the new groups for monitoring to ensure that the groups continue to operate according to the VSLA principles.

Community entry and sensitization for the commencement of the project was done in December 2021. 25 groups were expected to be formed under the project. The two field officers working on the project have formed 29 groups. All the 29 groups have been trained to elect their management committee members and develop their constitution. The groups have started share purchasing and will be trained on loan taking and loan repayment. GALS and Child Labour champions training is scheduled to take place in April.

Training of field officers for group formation has been completed. Community entry and sensitization for the formation of the VSLA groups is ongoing.

As part of the introduction of the VSLA-CHILD Methodology into existing VSLAs of Nyonkopa, 29 officers were trained by PDA between 14th – 18th February on the VSLA-CHILD methodology at Tepa in the Ashanti region. The participants were made up of 28 Technical Officers from various districts across the country and the Child Labour Remediation officer from the head office. The participants were to serve as trainers of other technical officers who could not attend the training and also organize training for 2 champions from their VSLAs. They were given field officers guide for the VSLA-CHILD methodology and Anti-Child Labour Facilitation Guides to equip them to discharge their duties successfully. They expressed their gratitude to PDA for the training and promised to impart the knowledge gained to their colleagues and the champions from the VSLAs.