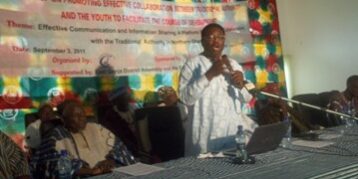 Choice Ghana was founded in 2005 in Salaga in the East Gonja District of the Northern region. Its vision is of ‘a community where everyone including the youth, has a choice’. Choice Ghana works with communities for sustainable socio-economic development through a rational choice led approach to human needs. Over the years, Choice Ghana has engaged the East Gonja District Assemble to support the needy but brilliant students to attain tertiary education and also develop sanitation by-laws.

Choice Ghana under the Mwananchi Project is concentrating on ‘Promoting Effective Collaboration between Traditional Authorities (TA) and Youth to Facilitate the Course of Development’. The project is primarily targeting small class of well educated elite, large class of energetic youth and a well ordered chieftaincy system. The ultimate purpose of the project was to promote accountability and transparency of TA through the involvement of the youth in decision making processes. The project was concerned about participation and involvement to ensure that there is effective communication among parties for the reason of access to information and an avenue for the voices or views of the masses to be heard.

Choice Ghana through the Mwananchi Project has created a sustained platform for dialogue between traditional authorities and the youth, a youth led leadership front that allows for peaceful and continuous interaction between the youth and traditional authorities, a community bank account opened, a development plan put in place for the community and traditional authorities involving the youth in decision making. From these outputs, it can be said that majority of the expected outputs of this project have been achieve. These achievements were made as a result of a dialogue platform created, a secretariat (Kpembe Development) put in place, some royalties released to be collected and paid into community development account and an impressive recognition by Choice Ghana in the district especially the D.A, TA, GES, MOH and other CSOs. This notwithstanding, Choice Ghana in undertaking this project encountered some challenges some of which include general cooperation and reluctance by the youth to get involved with decision making process (using the dialogue platform, attendance to meetings) and lack of media publication as well as inadequate information/data for the development plan.

In the next phase of the Mwananchi Project, the organization will focus among other activities on action research that seeks to critically involve stakeholders in eliciting more information and ideas aiming at strengthening and consolidating the achievements already made. The involvement and collaboration with all these stakeholders and actors will help in the proper planning and tackling of key questions for a sustainable solution. With this, the second part of the Choice Mwananchi Project will seek to achieve the objectives of TA formally accepting and involving the youth in important decision making processes, organize one community dialogue forum by December 2011 and to finalize and launch the community development plan by June 2012.