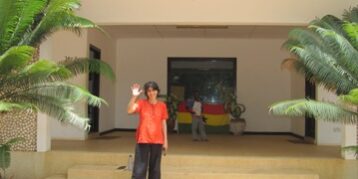 Radio Ada is the first non-governmental community radio station and also the first station under the Ghana Community Radio Network (GCRN) with a development objective empowering the marginalized in the communities and groups to generate and share their knowledge and experience and to participate in discourse and decision-making on issues at every level which affects their everyday lives. Officially lunched in February 1999, its success has informed the further expansion of the Ghana Community Radio Network to eight more outlet; championing the course of the poor and marginalized.

RADIO ADA UNDER MWANANCHI-Phase I

The Mwananchi project undertaken by Radio Ada was centered on Governance on the Songor Lagoon. The project was aimed at generating greater accountability and transparency in the trusteeship of the Songor salt producing lagoon by national, local and traditional governance structures. The initiative sought to better inform and include local citizens in the decision making processes surrounding the Songor and its future. The project was carried out in Dangme East District of the Greater Accra Region in Ghana. The beneficiaries were made up of citizens of Ada, those who rely on the lagoon for their livelihood, particularly migrants, women, children and the disabled for whom salt revenue is one of the few livelihoods available.

The PHASE I was successful in the establishment of trusteeship. The target of twenty was exceeded to twenty-two. Through Mwananchi, a platform has been created for raising issues of governance and duty bearer responsibility in the area. In addition, there is vibrant demographic group discussion in the communities that benefitted from the project.

Recent central government dealings in the area have revealed an emerging intention to connect the bedrock of Ada’s economy i.e salt production to the globalized free market. Not only will this alienation of the resource have a devastating effect on the local economy, but it will also heavily impact the environment of this fragile ecosystem, as shown by the depleted state of the historically significant Okor forest, as well as undermine a central pillar in Ada cultural identity. In view of this, an extension of the project is to draw in different duty bearers who hold important positions in terms of representing the needs of the locality at the national level: namely the area’s members of parliament. The station will also reconfigure the themes of the soap opera to address the new challenges faced by the area. Finally, the station will also be undertaking community forums as well as song and poetry contests as mechanisms that both enhance the content of the shows, and act as a monitoring and evaluation tool for ensuring the shows are having the needed impact.

The extension would have three objectives.